Universal’s Islands of Adventure is one of Florida’s most popular and rated theme parks. This unique place has won international awards for its rich experiences and attractions. The list of attractions for families in this huge park is long enough to last a few days Attractions on Adventure Island The Wizarding World of Harry Potter. As well as the Hogsmeade. One of the most popular areas of ​​Adventure Island with a number of interesting places with Harry Potter-themed like Hogwarts. Hogwarts famous Castle and the Forbidden Forest. Venture into the magical world of JK Rowling through the iconic Harry Potter and Forbidden Journey. Maybe fly like a mythical creature flying on a Hippogriff roller coaster.
There are many other attractions, performances, and experiences to enjoy. Marvel Super Hero Island. Marvel comics readers will know exactly what’s in there. Marvel-themed life-size rides, rides, and characters like Spider-Man’s Bizarre Adventure. The 3D simulator and many other themed attractions. The park is divided into 8 different areas or islands. These include the popular Wizarding World of Harry Potter. Hogsmeade, Marvel’s Superhero Island, Lost Continent. Port of Entry, Toon Lagoon, Jurassic Park, Skull Island. The Su Landing, the Lost Continent. You can enter an ancient world of myths and legends, including Sinbad’s Bazaar. The Lost City and 2 different reality shows which are Sinbad’s Eighth Voyage and Poseidon’s Fury 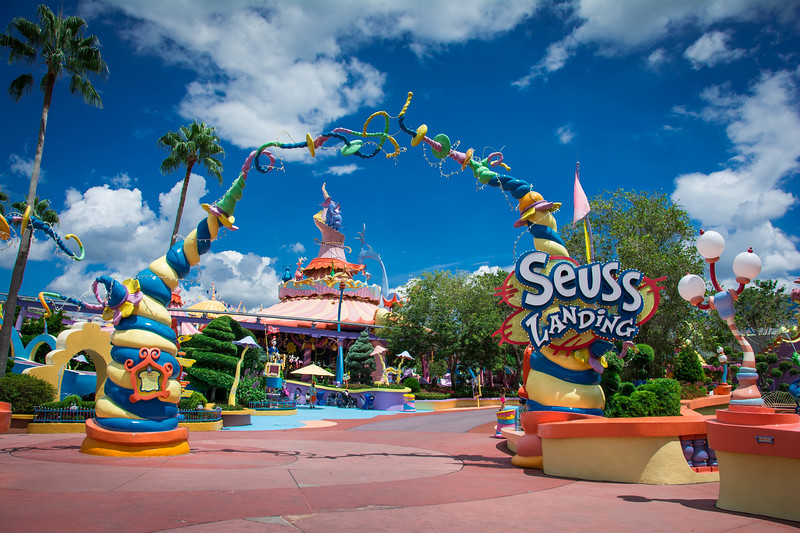 The top 3 attractions here include Dudley DoRight’s Ripsaw Falls log water tank. Popeye and Bluto’s BilgeRat Barges and finally Me Ship. The Olive, which is a Popeye boat-themed playground. Jurassic Park, going back in time some 16 million years ago, Jurassic Park offers a number of different attractions. All based on the famous dinosaur movies. Face to face with Blue the Raptor and find the 85-foot-tall Jurassic Park River Adventure Water Ride.
Skull Island means that the area is inspired by a modern interpretation of the classic King Kong movie. The star attraction is Skull Island: King Kong, a 3D journey through the territory of the Great Ape. Seuss Landing this interesting area is very suitable for children to participate in various Dr. Seuss-themed rides and performances. Including The Cat in the Hat, CaroSeusse,l, and interesting stories you will hear. Stage performances are a part of the larger Universal Studios Orlando Resort. You only need to purchase 1 ticket to enter the Islands of Adventure, and the Park in the Park.
The ticket allows you to enter the Islands of Adventure and the next-door Universal Studios Florida. The Islands of Adventure at Universal Studios Orlando is definitely a must-see for those going to Florida’s theme parks. There are enough rides, rides, performances, shops, and restaurants for you to visit for a few days. Keep in mind, if you want to enter the other half of Universal Studios, you will need to purchase a park to park ticket. To get the most out of these two parks, it is recommended to reserve a day for each park. As well as provide all-inclusive multi-day passes. The hotel has parking spaces and the shuttle service operates at 7 Universal Orlando Resort hotels.